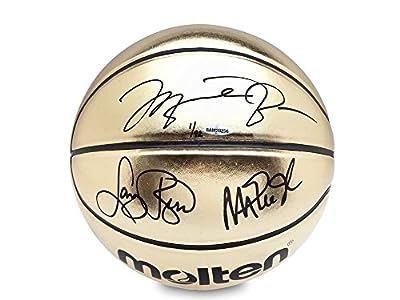 The 1992 United States Men's Olympic basketball team is often regarded as the greatest sports team ever assembled. They won the 1992 Men's Olympic gold medal by defeating all eight of their opponents by an average of almost 44 points per game. They didn't just win the Olympic gold medal; they became ambassadors for the game and forever changed the way the rest of the world would play the game of basketball. The twelve man roster nicknamed the "Dream Team" featured 11 future Naismith Memorial Basketball Hall of Fame members. In 2010, the "Dream Team" was elected to the hall of fame. Three of the most recognizable members of the 1992 team included Michael Jordan, Magic Johnson, and Larry Bird. All three hall of fame members have signed this limited edition ,92, Molten gold trophy basketball in black paint pen. Their signatures are deemed authentic by virtue of Upper Deck Authenticated's Five Step Process.