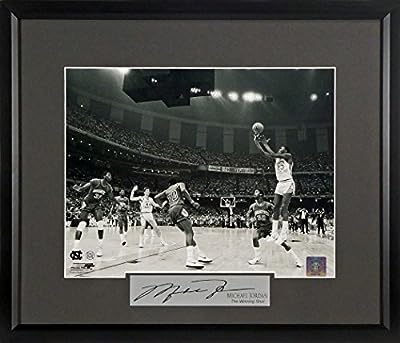 Before his amazing professional career with the Bulls, Michael Jordan played his college ball at the University of North Carolina. His first season at UNC (1981-82), Jordan earned a spot as a Tar Heel starter, only the fourth freshman ever to do so under Coach Dean Smith. And during the 1982 NCAA Championship Game against Georgetown University (featuring Patrick Ewing!), Jordan earned his first real taste of fame by making the winning jump shot to seal a 63-62 Tar Heels victory and the national title. Jordan played two more seasons with the Tar Heels before declaring himself eligible for the NBA draft. He was selected college player of the year in 1983-1984 and in '84 he led the United States basketball team to a gold medal at the Olympic Games in Los Angeles. Then came his years with the Bulls... Remember the shot that started it all for Michael with this very cool collectible. Part of our UNSIGNED SG Signature Series that include an SG Exclusive engraved facsimile signature inset plate. A great piece of Sports Art from the greatest to have ever played on the hardwood.